THE DAY AFTER THE BRUSSELS' ATTACKS

I think that everybody knows by now about the terrorist attacks in Brussels at the airport and in a metro station. Usually people are believed to be rather uncaring, everybody lives for himself. But when it comes to a tragedy, we get a completely different picture of the people who surrounds us.

After the attacks, it warmed my heart to hear and see how people helped each other. As the public transport was completely interrupted lots of people living outside Brussels couldn't get home or leave the city. Spontaneously transport propositions appeared on a special Facebook page and a phone n° was given on TV and Radio, where people could ask to be picked up and driven home by volunteers.

Lots of women offered to pick up children from day care or school in case the parents were stuck in Brussels until very late.

Hospitals and the Red Cross had to stop blood donors for the moment, there were so many who offered their  blood to help safe lives. They have to come back later

A bus driver stopped his bus when he saw a blind lady who seemed to be lost and helped her into the bus.

Others offered rooms for those who were stuck at the airport or elsewhere in Brussels and couldn't get home.

Brussels' Place de la Bourse became a focal point for grief, solidarity and resistance to Belgium's worst terror atrocity, as messages of support poured in from around the world on Tuesday night.
Old and young of all colors  held hands together.

They left flowers, candles and even beer bottles, while scores scrawled colourful measures on the paving stones, many in English, paying tribute to the victims and calling for love and unity. 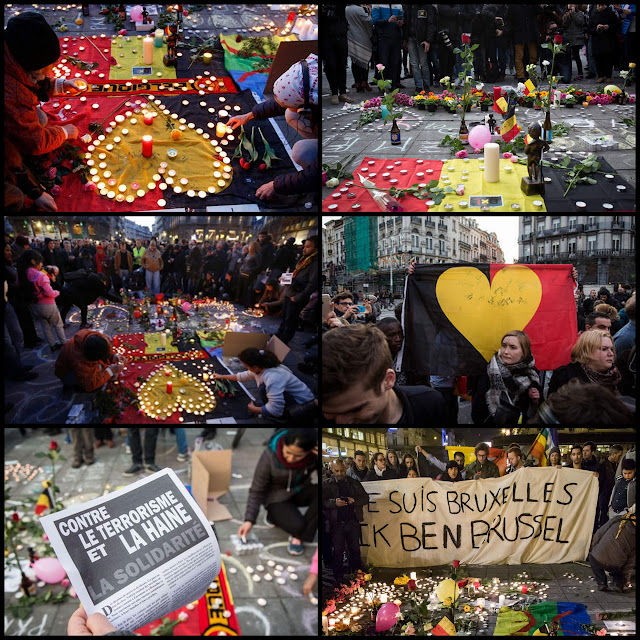 Hi Gattina - it's good to see the help being offered, and thus the sympathy, empathy many will need in this sort of dreadful and so sad a situation ... With thoughts - Hilary

Heartwarming to see how people helped each other in all kind of ways. That softened a little the pain of suffering. The aftermath will take a long time I am afraid.
Marianne

Really nice post, Gattina. Belgians helping Belgians in a time of crises should not be unexpected and it good to hear it has happened. But how integrated into Belgian society is the three quarters of a million Moslem immigrants, mostly in Brussels?

So glad you're ok and that your friend Ilona eventually got home ok. I can't imagine how scary that was to actually be there. Though these events show the worst side of humanity in the terrorists, it's heartening to see the best come out in the people who extend themselves to help others in times like these.

It is good to see everyone rallying round to help their fellow man. I wonder if terrorism would exist if we all thought to help others before ourselves. It is going to take a long time for Brussels to recover from these atrocities.

It's wonderful when people help each other at such times. Kind of reaffirms your faith in human nature…and the human spirit, too.

So grateful that you are okay. So sorry this happened. Sending prayers for all.

Here in the USA, I feel that I am not the only one praying for the Brussels people. What you shared about people's offering to help others certainly does warm the heart. God bless those people and may you be safe.

Dreadful, dreadful happenings - but we must always look for the good in the midst of the bad.

Such a horrible event brings out the best in good people. My heart aches for the people of Brussels and all of Belgium as they mourn.

I think, most people, are good at heart. I hate the terrible terrorists, but good and loving people will prevail, if we all stand together against them.

Thanks for sharing the kindness and cooperation shown by strangers after the attack. It's reminds me that we are still human and there is still enough love to overcome the hate.

The love, warmth, hope, and compassion of humanity cannot be destroyed by haters of life. I'm glad you're safe, Gattina. Big hugs to you and yours.

Such a scary time in the world. It's nice to see all the wonderful people who come to help others in this time of need.

This is heart-warming, Gattina.


What happened in Brussels is near to my heart, because in my childhood, I went there for several school trips (I lived in Zeeland, across the border).

One of your photos of expression of love in Brussels I love for you to post to the meme/challenge I started a month ago, called SEASONS -Last of March.
(Any thing or any experience during the season is great).
The link is open from Monday through Wednesday till 7pm, US, Pacific time. So, there is still time. Hope to see you there!

It's always heart warming to see help and kindness emerge in the time of darkness and ugliness.

Sending prayers across the water to all devastated in this horror.