Before my holidays in Egypt, I had sworn to myself that this year I wouldn't do any Christmas decoration at all, because the Christmas we celebrate now, has nothing to do with the Christmas celebrations I was used to since my childhood  and during our marriage ! Now we celebrate with my son and family and everything has changed.

To my own surprise when I came back and had seen all the beautiful Christmas decorations in the Hotel, and listened and danced to the Christmas songs (that's where I fell and still have a huge bruise on my bottom) Saturday it itched in my fingers and I carried up the box containing Christmas decoration with the label "Christmas for two".

on the bottom right the smallest Christmas tree we ever had, even smaller than last year, but with little candles !

On the table is the advent wreath with four led candles. I can switch them on with a little remote control !

I also put garlands in our plants, and I am quite happy with the result, the whole living room looks very cozy ! 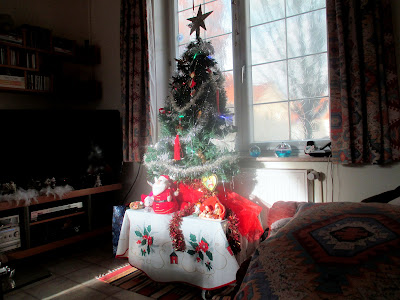 In the afternoon I went to Ilona to exchange our Christmas gift, her tree was bigger, but she also receives her 5 grandchildren with husbands or partners and two great grandchildren ! I think her living room will explode ! Fortunately her daughter does all the work, a cold buffet, otherwise it would be a little too much for her !

Sunday while I was helping Nicole with her Christmas decoration, the Waterloo alderman brought me the 2016 calender which had been printed in honor of the volunteers who had helped during the bicentenary festivities of the Waterloo battle.

He rang our bell and Mr. G. received the calender, in my absence. 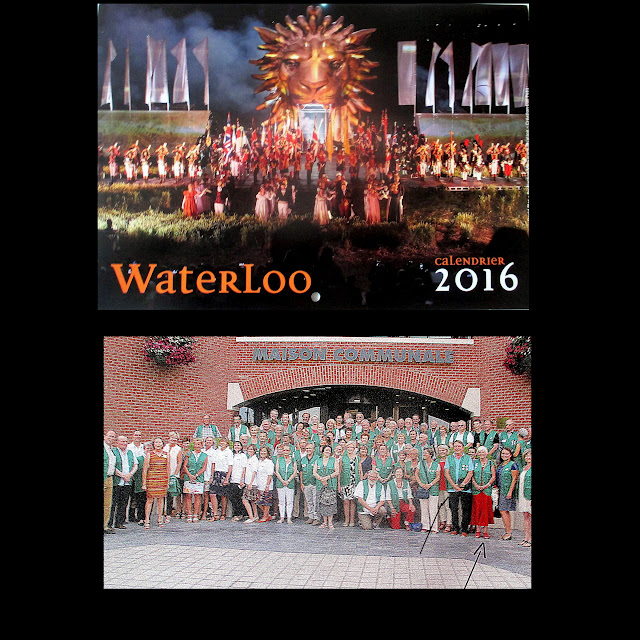 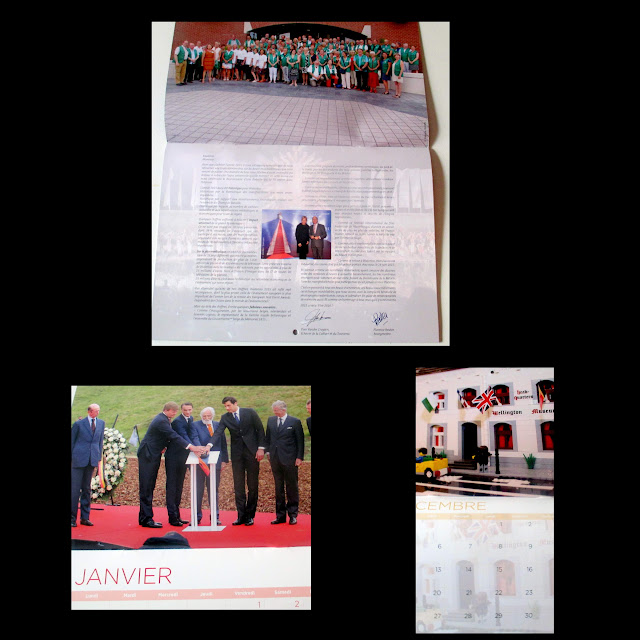 An introduction from our female mayor and the alderman, thanking the volunteers ! A picture of the Duke of Wellington, the King of the Netherlands, and the other descendants of the Generals.

I will give this calender to my grandson, so when he learns the Battle of Waterloo at school, he can say that his grandma was a volunteer at the bicentenary of the battle.
Posted by Gattina at 06:30

I still have to start on my decorations. Even though I celebrate on my own, it won't feel like Christmas unless I've decorated. I just have to clear some room for the tree!!

Well you made the effort too I see, the older you are the less I look forward to get all the stuff into the room.But when I see all the other houses around with light decorations, it feels a bit dull to have nothing.

That calendar is a wonderful tribute to all the hard work you did and to have it delivered by hand as well! Glad you put the decorations around your home. It is nice to have that festive feel even if the family are not quite in agreement.

Only 3 sleeps till Christmas and I am still not inspired to put up decorations. I think I need a trip to Egypt. The calendar is a great souvenir for all your hard work at Waterloo.

Hi Gattina - Christmas catches up with us ... so pleased you put your decorations up. As usual you're doing loads - have a fun time ..and giving the calendar to your grandson makes perfect sense. Congratulations on a good year .. cheers Hilary