1. The days are coming and going and it seems to me that a week is just like a pearl necklace,  each day looks the same ! Even my activities, like each Monday going to aqua gym in the morning and then having a cup of tea together and chatting, which of course has different themes. Lots of people have the flew or a cold and the City's babysitter service is fully booked as the babies are sick have to stay at home while the parents have to go to work. Not everybody has a grandma at disposal.

2. Now we are 3 to go to Yoga, Dominique as usual but my other neighbor Vivi has decided to join in and she likes it very much. I booked my trip around the UK and now I got the confirmation and it's done ! The rest of the day I was looking at pictures of all places we will visit ! 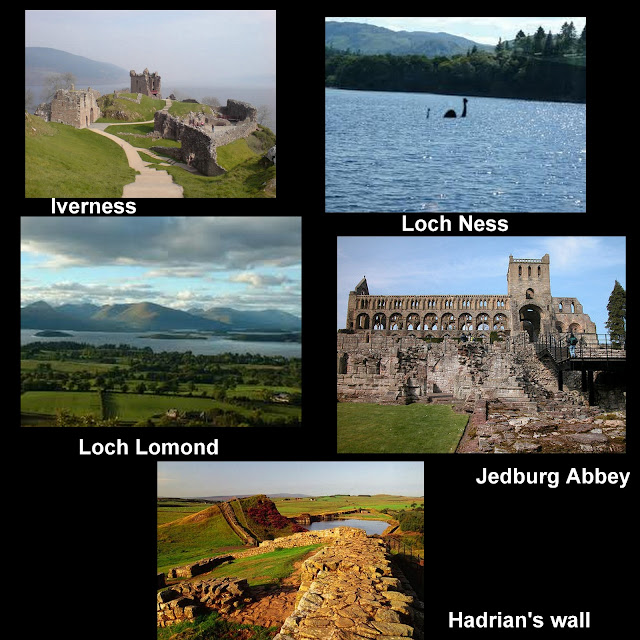 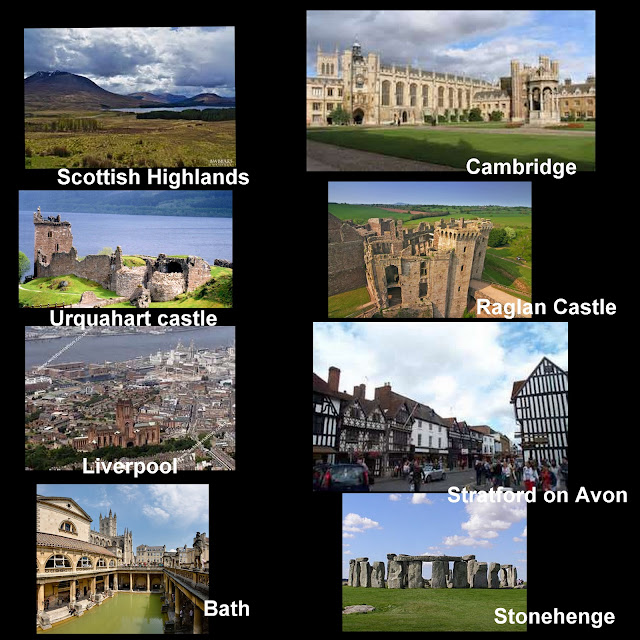 Preparing a trip is nearly as much fun then doing it !

3. My friend Nicole had internet connection troubles with her laptop, and as she has no internet at home she always goes to the internet service organized by the city with 9 computers to be used by the citizens who don't have a computer or don't have Internet. But she wanted to use her own computer. I picked her up and we had lunch together in our little Greek restaurant and afterwards she came with me to fix her internet connection. It turned out that a piece was broken and she had to buy a USB key for WiFi.

4. Although our house is not a castle, some people loose their orientation sense and always end up in my storage room instead of the toilet. While I was taking off my shoes in the basement she went upstairs, and found herself nose to nose with brooms, vacuum cleaner, handbags etc instead of the toilet, and on her left Mr. G. was snoring sleeping peacefully in his bed for his afternoon nap. Poor Nicole got a shock returned to the kitchen and then we burst out in laughter !

5. No birthday to celebrate this time in my painting course, but our coffee break was as cheerful as usual 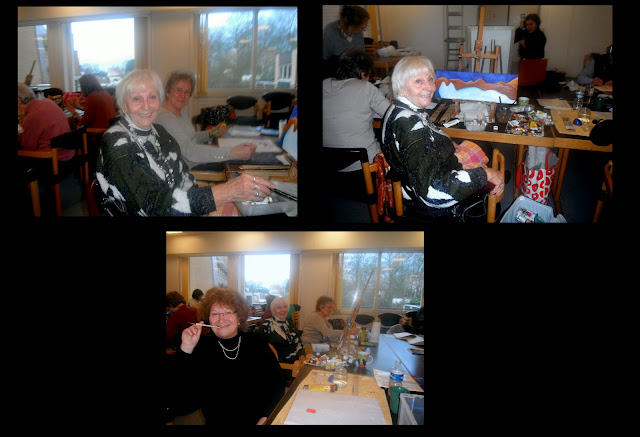 One of my classmates took these pictures while we were working very hard !

On my way back it started to snow again, but it didn't last it's not cold enough. No regret ! I have really enough of snow and winter. 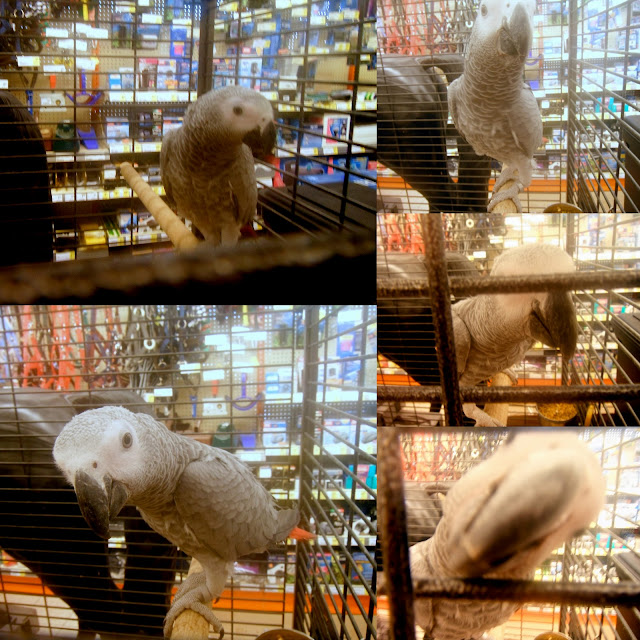 I stopped at my pet food store and said hello to Cookie, the parrot of the shop's owner. He greeted me with loud whistles and was very intrigued by my camera. On the last picture I just had time to go one step back he wanted to bite in my camera ! He is a very funny boy !
Posted by Gattina at 06:00

Hi Gattina .. looks like a great trip - that will be a huge amount of fun .. enjoy ... cheers Hilary

Looks like a really good trip. How are you getting around the country?

I would love to visit all those castles. It looks like you're going to have lots to do on your holiday.

Cracks me up about your friend getting lost in your house.

Oh I love that parrot I had a blue fronted one and it was my darling I taught him many good things to say and he was soo sweet.
Then I had to give him away.
Well nothing you can do.
I should join a painting class so I have some fun. Have to keep my eye open to find one close to home.
:)

Oh your trip to Great Britain looks fabulous. We were in Inverness was back in 1973...
It brings back lots of memories to see all your travel spots.
That's funny about Nicole getting lost in your house. :)
Have a good weekend.

You are going to all the best places on your tour. I have never been to Hadrian's wall and would love to go there one day.
Hope you see the monster at Loch Ness, I didn't but you might be luckier.

What a beautiful description: a week is like a pearl necklace. You certainly have a way with words! I LOVE the look of your holiday. Sob,weep. I WISH we were going. Never mind... next year is around the corner, LOL! You are such a star * with computers, internet and all things technical. Good on you for assisting your friends. I love Cookie. This is the first time I see him. We saw an African Grey in a hotel in South Africa. I asked him what his name was and he said: My name is Vice Grip! Eek. I stayed far from him. Hope your weather warms up soon. (((Hugs))) JO

I enjoyed your post. Your traveling pictures are so beautiful. I've never been out of the United States but my husband has been to Africa and Belgium.
Maybe someday I will travel abroad, who knows!

Wow, it looks like you're going to have a really exciting trip across the UK! I agree with you, the preparation is nearly as much fun!
God bless you!
Cezar

How lovely that you are coming to our lovely green land.
If it was not for the weather you wold never need to leave this country for holidays. And thank you so much for comment

Oh, what fun you will have in the UK! I love it there, and have visited many of those places!

You have picked some great places to visit. There are so many interesting places in Britain it is hard to decide which ones to see.

I'm a bit jealous of that trip...looks wonderful!

Have a great week ahead.

What a beautiful trip you prepared!!! chance you have! I had a busy week cause we had to see the doctors as Mélissa will be operated on tuesday : le ménisque. And this day I'll be on strike too so I 'll do the trip from the cinic to the city for the manifestation! Pierre will stay with Mélissa. But I'll come back at the clinic with them. With the two girls at home now I am always busy and in action! Tonight we were to the cinema and saw Happiness therapy!! It was a good film!