Mr. G has hearing problems, but for nothing in the world he would admit it. No, it's all our fault, we whisper, the cats included. He has a hearing aid, but he doesn't put it on, he pretends he doesn't need it. Therefore he lives with built in earplugs and I am accused by "normal" people to have a loud voice.

Mr. G. says I whisper, my son on the phone tells me not to shout ! Only my cats don't complain. But they too are a problem, if I ask cat Arthur, "have you catched a mousie today" ? Mr. G. would confirm "Yes the weather is lousy today".

Mr. G. always thinks that I talk to him.

And not only this, I sent him to a store to buy a foldable "visitor" bed. He didn't know where the store was. I explained him that it was at the place of the ancient store which sold household appliances. Instead of "place" he understood "face" and thought the store would face the other side of the street. (It sounds better in French) Nevertheless he turned around to find the store and complained bitterly afterwards that I hadn't explained the way properly. But he bought the bed !

The worst was when I forgot my keys and when I returned with Dominique home at midnight from the movies, I couldn't get in the house. I rang at the door. Nothing. I rang and rang and rang without success. He apparently slept deeply. I called his mobile, I got the voice mail. I rang again, nothing to do. Finally Dominique and I called together at the same time she our fix phone, I his mobile phone and rang the door bell. Suddenly we heard a little noise and the door was opened by a half asleep Mr. G. who asked what happened. I told him that I only wanted to get into the house and in my bed.

That was it. Fortunately I didn't have to call the firemen. 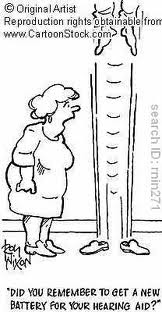 So funny, Gattina. Dick has been told he needs to do something about his hearing. He had it tested and was told he needs a hearing aid, but he thinks it's all a plot to get him to buy something. Meanwhile, he says I'm mumbling, but if I talk to the dog, he yells, "I can't HEAR you!"
LOL
— K

Poor MrG, I have a hearing aid too but I never wear it. If only people would stop mumbling....my hearing is perfect.

Oh dear. I'm sorry to be laughing at Mr G's bad hearing but I can't help it! It's just too funny, especially the last bit!

You make me smile but I have every sympathy - with Mr G, since I also have poor hearing! It's best to see the funny side. Hearing aids are not fun to wear and do not magically make everything clear (like spectacles do) so they don't feel like a good solution to the wearer. But without them I can hear nothing so I have to use them.

this is a problem at our house too. Then when I ask the same question again, he says I HEARD YOU. And then I ask, well you didn't answer, why? And he says I was thinking.