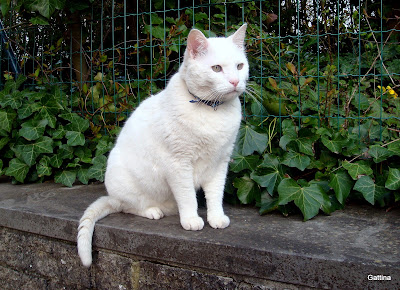 Since the 36 years I live in this street, some of the owners have moved away because their house became to big once the children gone. This was also the case of my neighbor Victor. His sons were gone long ago and he was a widow since some years.

When he met a widow in a charity thing, and living in our street, he fell in love and decided to move into her house. You have to know that our street is virtually divided into two parts , one AFTER the roundabout and the other BEFORE the roundabout where cows used to live on a field. From this part we don't know very well the new people who have replaced the cows and living in the new built houses. The old houses are still there but I only know few of the owners. The widow's house is just opposite to where the cows once had been and which she regrets dearly.

Anyway, Victor wanted to move and live with his widow, so he had to get rid of some furniture and other stuff. I was just at the window while making my bed and saw him putting an old table on the sidewalk. My cat Arthur had observed this too and showed up in all his glory. When something is going on in our street, Arthur is worse than a paparazzi. As soon as Arthur had spotted the table, he hurried over the street, jumped on it and settled down to have a better view of what would go on now. Victor saw him sitting there and probably sighed, because it was not the first time they met. Once Arthur had climbed through an open window in his basement and hidden behind the logs. When Victor had to take some for his open fire, Arthur suddenly jumped out of the logs and Victor almost got victim of a heart attack.

Arthur greeted Victor with his usual kindness by turning around his legs. Unfortunately Victor was now busy with carrying an old TV and almost fell over Arthur. I heard a for a lady unspeakable word. I have to admit that it took me as long as Victor and Arthur were outside to make my bed. I am not a curious person.

Victor put the TV on the table and returned into the house followed by Arthur of course. Then he came back with a little book shelf which had also seen better days, went down the steps, stumbled over Arthur and could hardly keep his balance. He ordered Arthur to go away. Arthur suffering from bad hearing when it suits him, sniffed at the floor lamp and I thanked God that he was not a dog. Then he sat on one step, watching what Victor would bring out next. Another lamp with a string hanging down !! Arthur probably thought what a kind man Victor was, he even brings him toys on the sidewalk, and jumped at the hanging string. Victor stepped back and stumbled against the steps. He again asked Arthur to disappear, but Arthur wanted absolutely to help. Moving away doesn't happen every day.

The third time he came out with a plush armchair a dream for a cat ! It must have been quite heavy as poor Victor's face became completely red. While he put it down, Arthur happy, jumped in it and settled in for a little nap, still keeping one eye open for the next events.

Finally I really pittied Victor and hollered over the street if Arthur did disturb him. He shaked his head and said, that Arthur really is a cute and very social cat, but if I could lock him in until he finished with his moving ? Of course I agreed, crossed the street, tried to pick up a wildly struggling Arthur and carried him over to our house. He was really angry and tried to jump off my arms. I quickly put him down in the garage and closed the door. He gave me a killer look and sat at the closed door. Then he said "meow" just once with his Hitchcock horror movie voice. Good heavens I thought, now he will sing all cat operas he knows and in all tone scales. And that indeed happened. I tried to escape into a room far away from the Garage door, but I still could hear him. 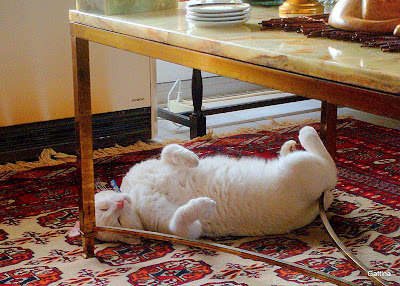 This event probably has traumatized me so much, that I will never forget the day Victor moved away to his widow, where he happily still lives. Arthur doesn't go until there since the cows are gone.
Posted by Gattina at 06:00

How funny!! Arthur the curious cat!

Isn't it sad when the fields full of cows are swallowed by new housing.

Arthur is so cute! He wanted to help!
I can't wait to live at the new home with my cats! I miss them in my daily life! It's Bastille Day and this evening I will meet our adorable blogfriend from Barcelone!!!Stay tuned!

How sweet your Arthur is! I so enjoyed your story and Arthur Gattina!~Ames

Isn'it funny???! I just fell in love with your Arthur!

This is such a funny story and a wonderful start to my day! I love your Arthur already and bet that Victor misses him now that he has moved away to where the cows once were.
Have a wonderful M filled morning!

Silly Arthur, just wanting to help and be a buddy!

Oh what a curious cat Arthue is :) He is super cute too.

If it weren't for his allergies, JDaniel would love to hang out with Arthur.

Laughing...I'm more of a doggie lover myself, but I have to admit, Arthur really is something!

What a lovely story, Gattina.

I'm afraid my entry is not so entertaining, but it's still full of love:

Arthur is simply adorable! I love the way he's laying in the second picture. Your story was told marvelously!

Oh what a story! That adventurous, curious,unstoppable Arthur!
Oh no! --"now he will sing all cat operas he knows and in all tone scales."--I know exactly what you mean! My white kitty can do the same thing!

I love this story. What a wonderful children's book this would make!

I would have been tempted to go gather up the furniture. It sounds like some of it was neat!

Thanks for charming us this week. I adore your stories.