1. The week started with our Scrabble group and some other girls because Nicole had her birthday and had invited some after our game. So we were 3 still married girls, 2 widows and one divorced. From the married girls the husbands are all alike they don't like to go out anymore so in total we were 6 "widows" and had a lot of fun and laughter. All worries were forgotten, because we all had one or even several, we talked about and found out that more or less we all had the same. Two of my friend's children are getting divorced and apparently the divorces are not so easy. Sad.

We had a cheese and sugar pie and they all disappeared !

2. We returned to winter and it was freezing, my already white car was even more white with the frost. The farmers are all complaining because it damaged fruits and plants. First it was too warm and everything started to grow and bloom and now it's freezing. Hopefully it won't last too long !

3. Our mayor cancelled the "Repair Café" because of the attacks in France ! Repair Café is a nice invention were volunteers repair household appliances, computers, clothes etc. She (our mayor is a woman) probably thought that the good Waterloo people were tinkering some little bombs out of a sewing machine. There were a lot of protests because we don't want to change our lifestyle because of these crazy terrorists. That's all they want !

4. As I go for a week to Egypt to fill in my empty tank with some energy, I had to buy sun cream ! Because there the sun shines and it is very warm. In the past it was difficult to find sun cream during the winter because you were supposed to stay home and only go away in summer, but now as people travel the whole year long I found what I wanted immediately. On my way back I stopped at Nicole's for a little chat. 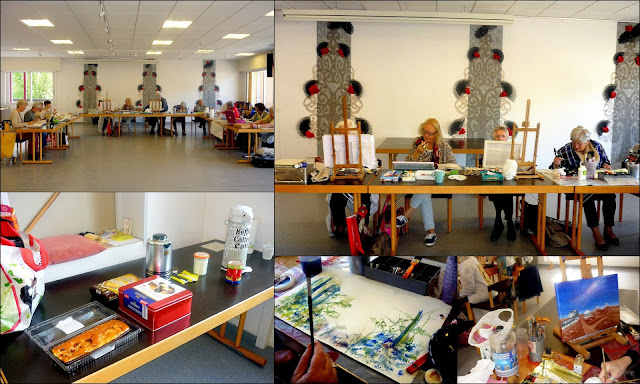 We were 17 in our painting class, and one had brought a nice apple cake and another cookies for our coffee break. We were expecting visitors, for new inscriptions, fortunately nobody came, because we are 20 I think when everybody is there and we thought that's enough. Our poor teacher had already a lot to do today ! There was Nicole struggling with horse legs and another with the perspective; As usual it was a nice morning !

The rest of the day I was busy on my computer, it was cold and windy outside.