According to Wikipedia a map is a visual representation of an area—a symbolic depiction highlighting relationships between elements of that space such as objects, regions, and themes. Which doesn't bring me any further to understand how to read a map !

It also says that road maps are perhaps the most widely used maps today, and form a subset of navigational maps, which also include aeronautical and nautical charts, railroad network maps, and hiking and bicycling maps. Fortunately I am not a pilot, because instead of landing at the South Pole I would certainly fly you to the Northpole if I follow the map. I am not a captain either although there are captains who are like me, they can't read a map, because otherwise the disaster of the Costa Concordia wouldn't have happened. Fortunately I don't need hiking maps, I am too lazy for that and to sit on a bike I have forgotten.

It's a disaster for the driver (Mr. G.) when I sit beside him with a map on my lap, which he had given me explaining exactly where we are and where we have to go. So I sat there and looked at this network of different colored lines and curves and still didn't know where I was. He insisted and pointed his finger on the spot where we were supposed to be and then on the spot where we had to go. But it didn't work, because we were in the wrong direction, the place where we had to go according to the map was behind us. I found this not logical at all and said I have to turn around the map because it shows the wrong direction. Full of good will I did, but then I couldn't read the names of the streets or towns because they were upside down and I started to feel sick. I can't read for long in a car.

At the beginning of our life together he got very angry because he thought I did it on purpose, but I swore I didn't I just don't know where I am on a map not to speak where South, North, East or West is. For me on a map it's "up, down, left, right". Before the arrival of the GPS, the poor man had to stop, take the map and read where we had to go and then we arrived for sure.

But when I had to go somewhere alone with a map, it was a catastrophe ! Once I wanted to go to a town located in the North of the Country, but of course took the wrong way to the South, had to ask X times for my way and was exhausted when I arrived.

Although I know Brussels and Waterloo by heart, I still manage to take the wrong way, following my instinct. There was nothing to do, my instinct and the maps weren't on the same line. To my excuse I can say that I am a little dyslexic, and that's probably why.

When we were in London to visit our son, Mr. G. prepared the tube map for me : 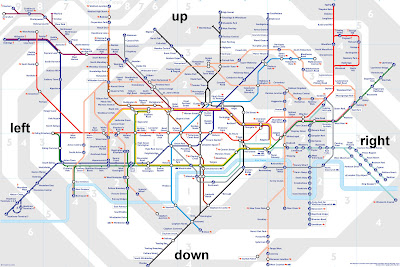 at least I found my way without any problems.

Since 3 years I am the happy owner of a GPS, and since I got used to not only listen to the voice but also have a look on the map, I am like a blind who became owner of a dog. 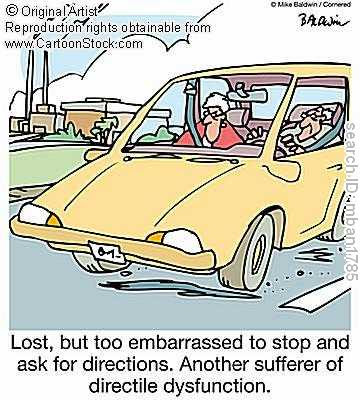 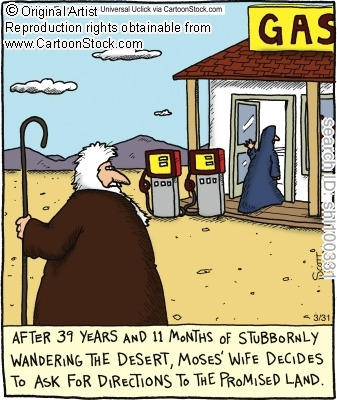 I always repeat to myself 'the sun rises in the east and sets in the west'. I live on the east coast and eventually find my way home. Even if I never got to where I was going.
Love the cartoons.

I may have several comments on this post. Thanks for sharing, I had a good laugh. I'm useless with direction. I have the last cartoon on a fridge magnet back home in SA. Have a great day. Jo

I need a GPS, I am forever getting lost, even though I plan out my journey.

I remember you and your GPS, Madame Gattina, and I can say it is very exciting riding with you, especially when you said, "I must remember left is the hand with my wedding ring"! I thought my husband was going to jump out the car window.
We loved our tour of Brussels, and we still talk about what a fun day it was. You are an amazing tour guide.
Luv, K

Haha, I like that last one -very funny, Riet!

I am not very good with maps but I seem to have a good sense of direction - not that we need maps here, of course.

I really don't know how we managed before we got our first portable GPS! Now we even have one installed permanent in our car. The portable one were VERY practical because we took it with us when leaving the car - which meant that we always could find our way back to the car!!! Yes, we *cough* have lost our car a couple of times... *giggles*

BTW: Tuesday we're off on a roadtrip to Mariestad to meet Tor, Anna and Renny is coming Thursday - so we'll have a blogger re-union until the end of the week :-)))

Love those cartoons! My husband LOVES maps. Me, I love my GPS! Funny how we're made of different cloth.

I like this post! My hubby is good with maps! I am not but I do love to look at maps. I work for a doctor who has the state of Colorado map hanging on the wall in our hallway. It is so fun to look at and find something new each time I do!! Have a terrific weekend. Thanks for the share!

your photo shots are cute.

OMG! That Moses cartoon is wonderful!
Often, I have to turn the map around, too, so it makes sense.

Up, down, left and right sum up My Map-reading skills quite well...

When a Map Makes sense to Me it will be a Miracle...

I just want to know the Magnificent Mystery writer that developed them... sigh...