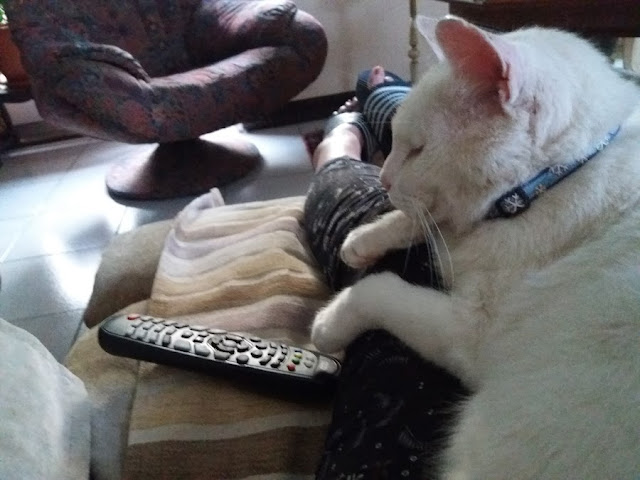 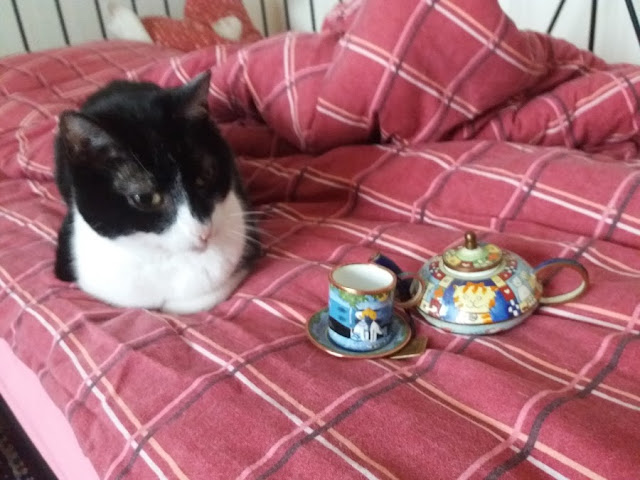 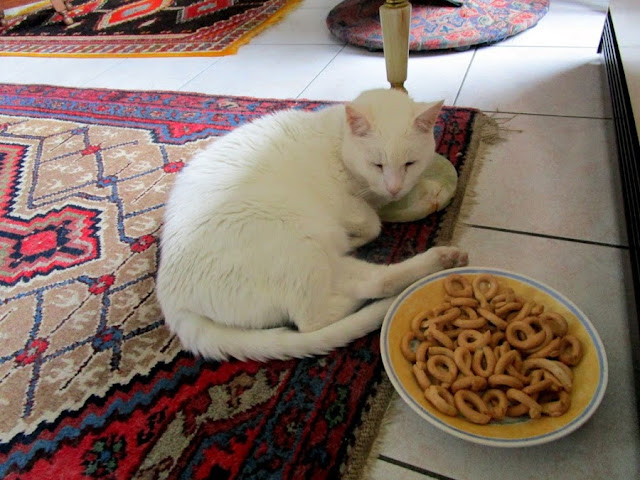 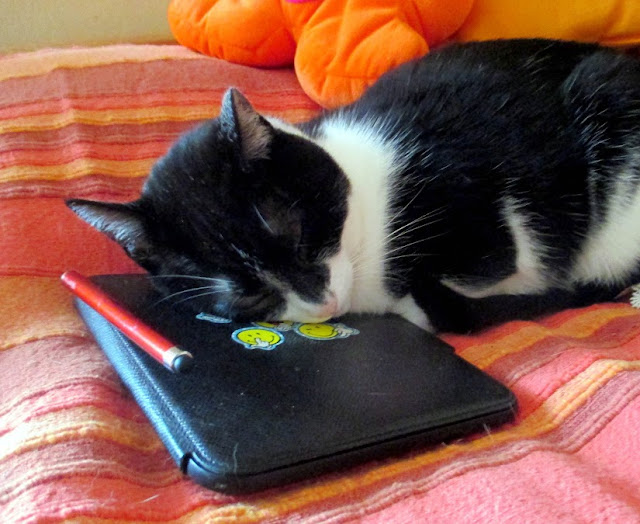 I became a politician 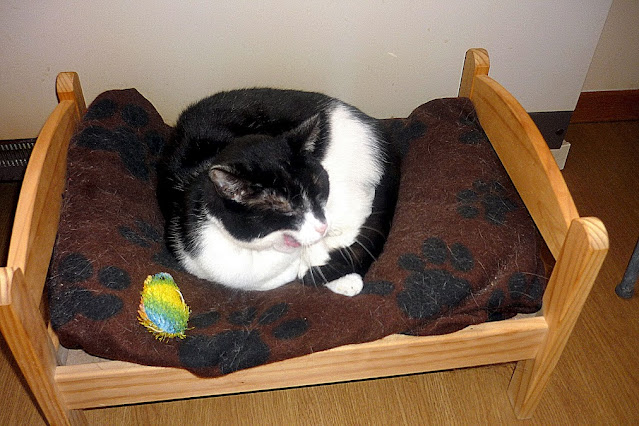 My bed is so cozy 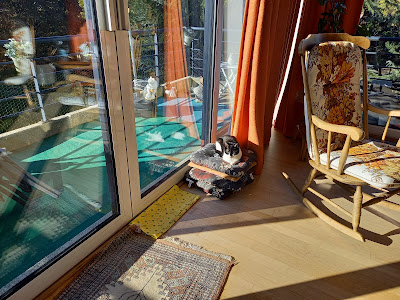 Saturday was like a summer day ! I even could sit outside in the sun, it was warm and relaxing. When it became cooler I went shopping,  I nearly ran out of cat food, and then I wanted to buy my rice cakes which I like to eat with cheese, but there was again a lack of goods in three supermarkets I they were sold out. We sometimes have waves of missing goods and then they are not available in any shop ! Some say that it is due to the Ukraine war (rice ???) others blame the Brexit, that there is too much paperwork now and the trucks are stuck. It's almost like the toilet paper crisis at the beginning of the Corona Virus crises.

When I was in the pet shop, a little girl pointed on rolls of colorful little bandages and told me that these rolls were toilet paper for cats. We all had to laugh, that was so cute.

I said hello to parrot Cookie, who lives in this shop for ages it must be at least 20 years. He is very friendly, but doesn't speak, only whistles when you leave ! (sexual harassement ?)

I returned home, met a neighbor in the garage and we chatted a bit about the "energy crisis" and the bills we would have to pay ! I hear that the whole day, on TV too, it's just the same during the Covid time. Now it's gas and electricity.

What I really don't need is to worry about something, I have enough problems with myself. Since I am back from Eastbourne which was a real mental health cure for me, I turn around Rick's three travel bags with all his belongings like a cat around a bowl with hot milk.  I am still unable to unpack the bags. They are under a cover and I avoid to look at them. One day will come and I will find my courage. 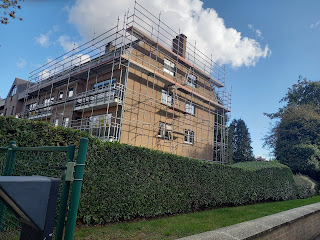 When I came back I saw that the building next to mine has scaffolds and I suppose that they will start the works on Monday. I only hope that they are not too noisy !

Sunday again was a wonderful day, and I could sit outside again. After lunch I thought I will take some pictures of beautiful colored leaves, before the trees start to striptease. But almost all trees I saw were still green and only a few turned to yellow 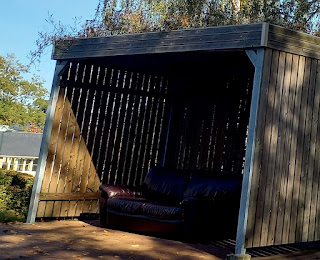 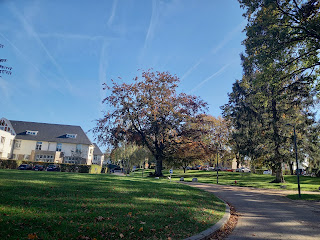 These pictures I took in a new area, where new houses were built and somebody had put an old sofa in, the "Garage" for bicycles ! 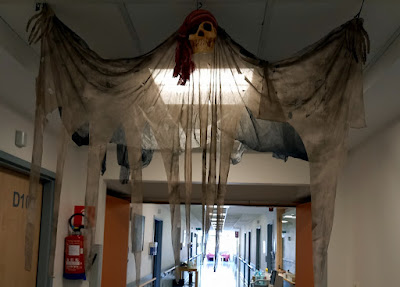 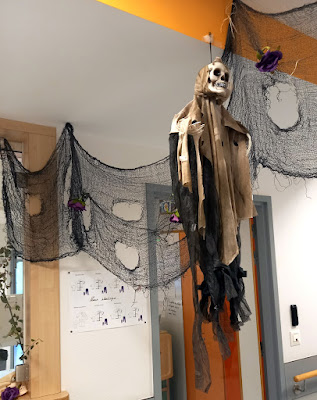 As I was very close to the Hospital where Nicole is still staying, I decided to pay her a little visit. First thing I saw was the Halloween decoration ! I hadn't seen any in whole Waterloo, but now in a Hospital where old people not used to Halloween are scared to see ghosts and skeletons hanging from the ceiling there are decorations

Nicole was happy to see me, she has enough to stay there, but fortunately next week she will be transferred to a Nursing home. I hope that she will like it, because she wants to do so many things and physically is not able anymore to do so.

It really hurts me when she asks me why I don't travel with her anymore and why I hadn't taken her with me to Eastbourne, I can't say we go  later, it's only getting worse, so I told her that her doctor has said to me that I couldn't take this responsibility it would be too dangerous.

She doesn't realize that she is not capable anymore to lead a normal life. So sad. We chatted about the travels we had done together and realized there were quite a lot. Then her daughter arrived and I returned home. 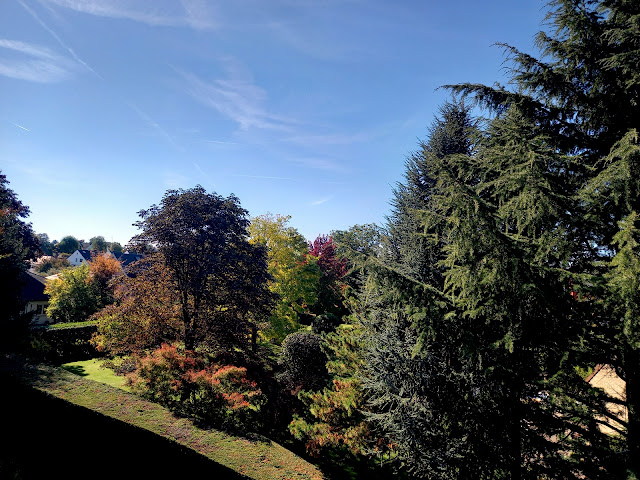 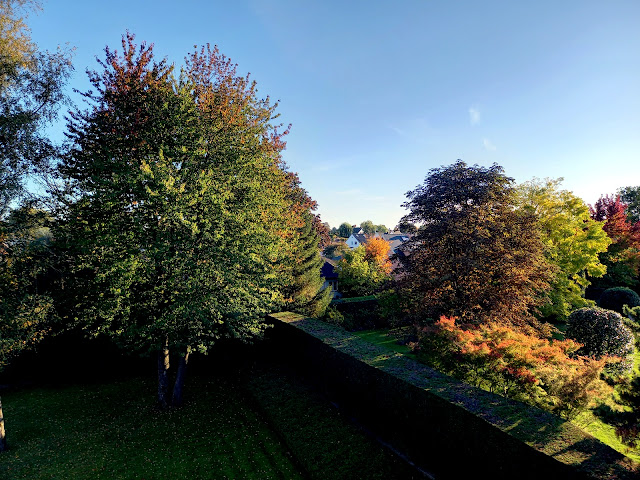 Once at home I took these pictures of the view from my balcony, fall hasn't really started either. I like to compare them with last year.