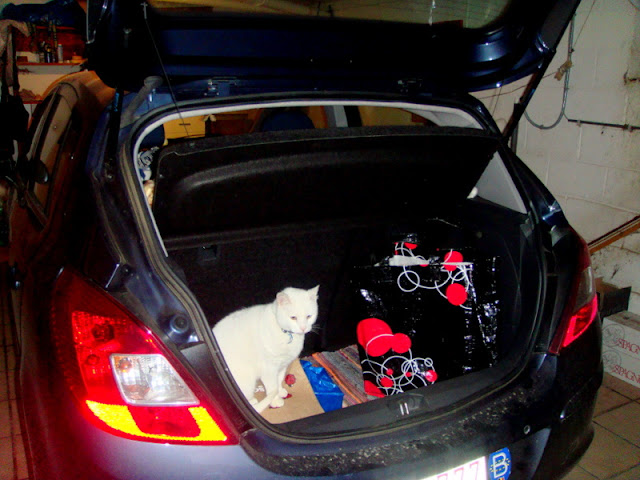 Arthur who left us forever after 20 years of life together, loved to ride in the car ! 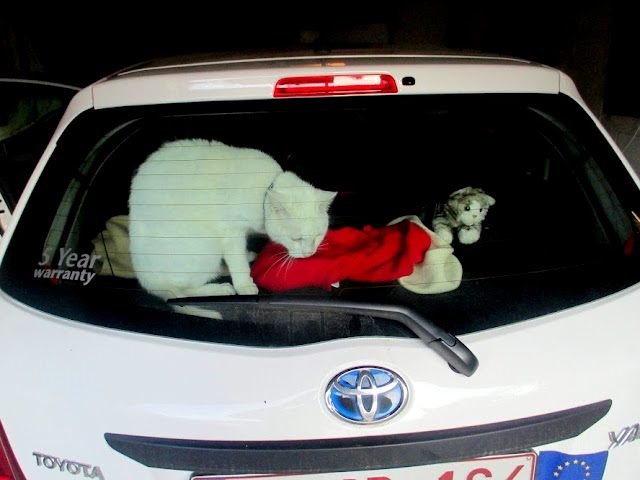 and gave a show for the following cars or for people walking by ! He was a very special cat 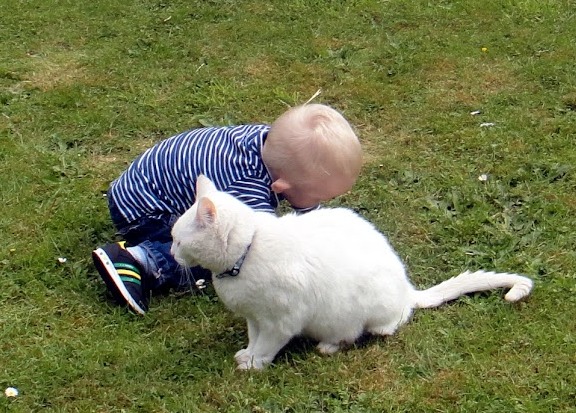 Usually cats don't like children very much, but Arthur loved them babies and toddlers and played with them. Here he is with one year old grandson 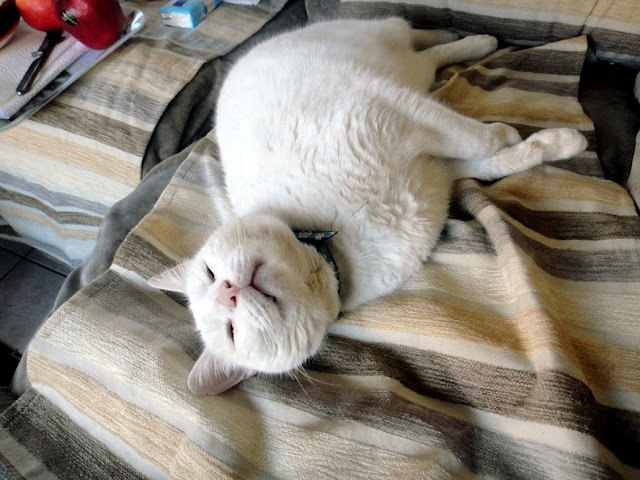 He made us laugh with his sleeping positions ! 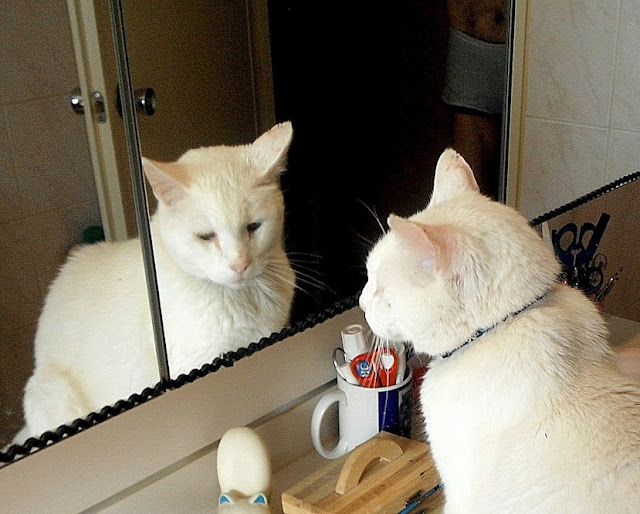 Some cats can see themselves in a mirror, others don't. Arthur just looked in the mirror as if it was a wall, he didn't see that there was another cat looking like him !

Easter Saturday, I had to get up at 6.30 am because my cleaning lady arrives at 7.30 and I have to open the door for her.  The days when I could sleep until noon without any problem,  I often wake up at 6 and when I have to  get up it's very hard ! That's psychological.

I crawled out of my  bed and made myself some coffee, fed Rosie who, as always, was somewhere waiting for me to leave the kitchen because she only eats when she's alone. If I happen to come into the kitchen, she runs away as if I had chased her away with a broom! Don't know why, she's been with us since she was a kitten ! 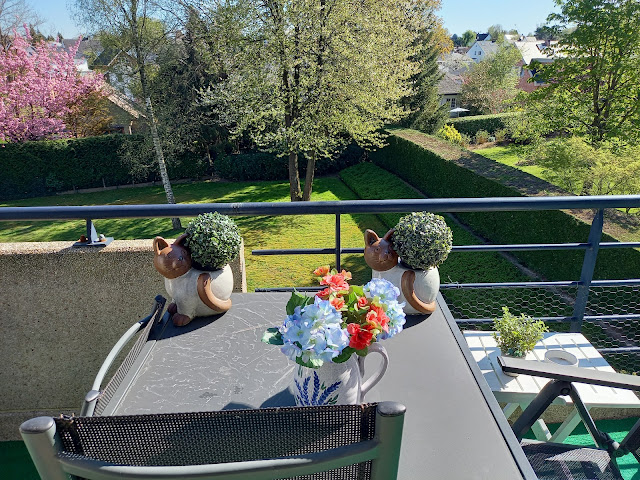 Honestly I had completely forgotten that it was Easter and was surprised when Maria came with a bag with two chocolate bunnies, eggs and a card, real cute ! 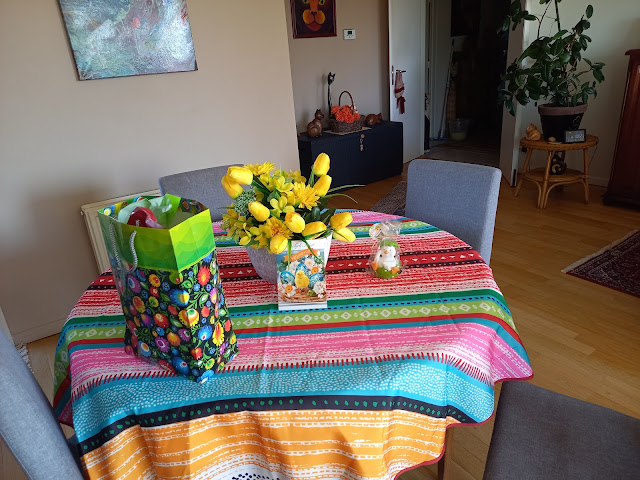 Finally she was able to prepare the terrace for the summer and now at least I have chairs so that my visitors can sit down. The weather is very nice at the moment and also warm around 20°C.

In the afternoon I visited Rick, he was laying on his bed and I immediately noticed that he was not really feeling well. But he appreciated the chocolate Easter Bunny, the shorts, and the game with the wooden cubes. I hung the picture of Rosie and me at the closet door so it was just opposite his bed and he could watch us. 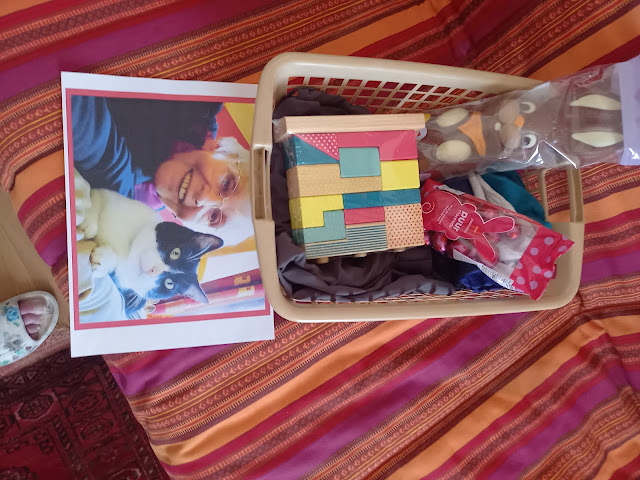 As he was tired I left and let him sleep, I thought I will bring him the chocolate pudding he asked for the next day.

It was so nice that I didn't want to return home right away and I went to the Waterloo Lion to count tourists. To my surprise there was a show going on and I parked my car to watch and take pictures. 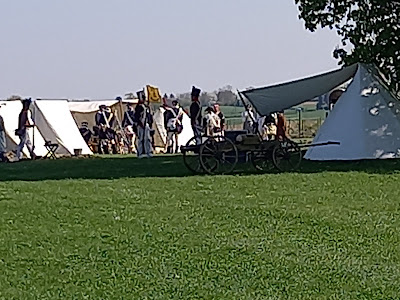 I chatted with the tourists and explained a bit the history, there were Germans and English people and of course a Japanese group. Suddenly the canons started to shoot and made a terrible noise the dogs became hysterical, the kids cried and the elderly certainly took out their hearing aid! I wanted to have a drink there but with this noise I returned home into my silent apartment.

On Sunday I got up as usual, prepared my posts and answered the Whatsapp messages which arrived en masse ! Then I went to Adeline my neighbor still in my bathrobe, to wish her happy Easter and we had to laugh because she wasn't dressed either. We had a coffee together and then she had to go to one of her sons and meet his family and kids.

I had thought to make a tour on the flea market, before I go to Rick to bring him his drinks and the pudding. It was hard to find a parking place, even with my mini car and suddenly I didn't feel like it anymore.  But I started to walk direction market, when I saw a friend I hadn't seen since ages, we used to play scrabble together and we had been in the same painting group. I don't like to play scrabble anymore already since a long time and only participated for the fun to meet the others. Same for painting. She told me how busy she is and she also has a boyfriend now. Why not.  Usually the youngsters (I included when I was that age) thought that once at 40 people wouldn't date anymore, but now I see that even 80 or older people look for a fitting soul ! As we chatted the time went by it was already late and I walked back to my car to drive home and she went in the other direction.

When I arrived in Riccardo's room, he had already a visitor, his friend with whom he had played Whist for years  she had brought him ice cream and made a coffee, he was spoiled ! and then I arrived with my drinks and chocolate puddings ! He was in a quite good mood, I told him who had wished him happy Birthday and Easter and he remembered all the people. I also noticed that he had tried to play with the cube puzzle and he found it difficult, but that he has tried was already a good sign. It's better then pull out doors of his wardrobe or staring at the ceiling ! Maybe they had given him a medication to calm him down. From time to time he has hallucinations "repairs" things.

Tomorrow is another day off and all shops closed, but there is always a lot to do with my new computer and now if it is as warm as today I can even "work" outside !

It's strange but now in my actual situation I love to be alone and write and enjoy the beautiful view, now that the trees bloomed or got fresh green leaves ! I also learned a lesson, be careful with so said "friends" they let you down when you are in troubles.