Besides the various birds which chirp here around before they get caught by cats and  dogs barking sometimes the whole day, which gets on my nerves, I had the charming sound of 4 cats. I point out "had" because sadly 2 of them passed away in the last 2 years. But of course they are not physically here anymore, but still in my heart.

I recognized immediately who was "talking" the biggest cat 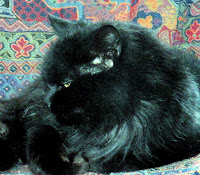 called Kim made a soft little meow, hardly to hear like a little kitten, which didn't fit to her body at all. 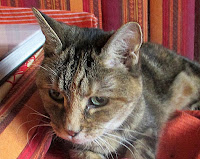 The other female Pookie was grey and had, what I would call a normal meow as all street cats 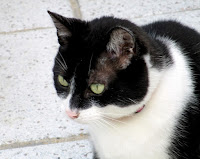 The third and still getting on my nerves is little Rosie. She is a very little cat but has a loud voice. Unfortunately when she was out and comes in she announces her arrival with loud meows, even when it is 3 am. She doesn't care if it is day or night, she just has to tell us that she is back ! And I never had asked her to do so !

The worst is Arthur 18 years old but his voice hasn't changed. He still sings operas 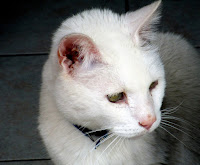 but not like a Pavarotti, but rather like I would imagine a cat in a Hitchcock movie, or one who on a graveyard who scares people to dead. He still surprises us and I don't talk aboutthe reaction of our guests. He does this mostly when he wants to eat and as he eats a lot he makes a lot of noise too.

What I also know is of course the moo of a cow, and other farm animals. When we first moved here I hated a rooster who crowed at 4 am and woke up the whole area. One day it stopped so I suppose somebody had complained or he had landed in a cooking pot.

Camels make strange sounds with their tongue, difficult to describe and you better step back if you don't want to get a shower.

There is also the snake whistle or the quack quack of a frog.

The friend's parrot who asked us "are you going to bed ?" when we left doesn't sound like a bird but rather like a human. When he doesn't speak he screams, not a very nice noise.

But the best sound for me I have learned on Internet thanks to YouTube ! An Australian friend talked about a bird called Kookaburrra

who laughed every morning very early in her garden and woke her up ! I had never seen or heard such a bird and now I want one ! waking up with a laughing bird can only bring a lucky day !

I love kookaburras and they can become so tame, whenever I hear one I rush outside to see where it is. But I do miss having a cat of my own to meow at me.

I can't stand barking dogs or mewing cats but I can't help laughing too when I hear a kookaburra or better still a group of kookaburras.

The variety of ways a cat can vocalise are surprising.

I think I have used the same kookaburra video in the past. If you haven't, look up how they kill snakes.

It's so sad when we lose our furbabies. I miss Shadow and Ginger. I can't believe that Arthur is still so vocal at such a big age. Our Chappie has the loudest meouw. All the time - she asks for food. The other three just sit paws neatly in front of them and look at me, until I react by giving them special treats. I love the kookaburra. Very similar to our kingfishers here in Africa .

I agree they make a very likeable sound.

It's definitely a different noise but rather loud lol