The last three weeks it has always rained on Mondays so we were happy to get together for our Scrabble and coffee chat. 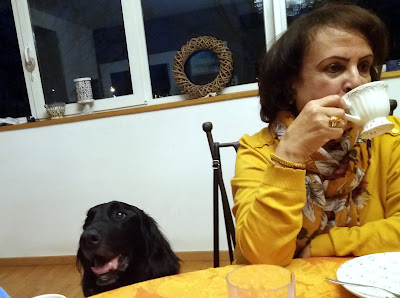 Two were missing, due to a cold and were replaced by Tosca at least for the coffee chat and hoped that he would also get a piece of cake. Which of course he got. 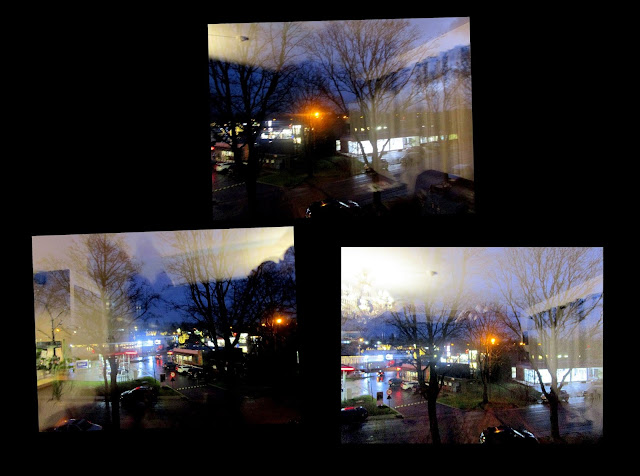 Mireille whose turn it was this time lives on the 4th floor of a building which overlooks shopping malls, restaurants and even a bowling. Now as it becomes dark so early her husband showed us that in the evening when watching TV they don't even need to switch on the lights. The room was clear enough without electricity. The view in the darkness with all these lights was far better then during the day when you see the buildings in daylight.

I still hadn't done anything for Christmas and finally forced myself to start by asking Mr. G. to carry the Christmas tree up from the basement into the living room and then it stood there naked.

After a while I pulled all my energy together and started the decoration, but first we had to put the light garlands around the tree ! What a work as it was all mingled together. Finally the garland was around the tree and I could start with the balls. 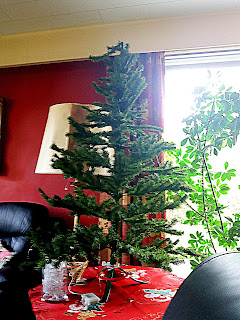 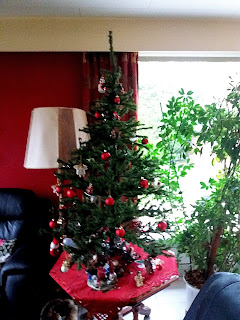 Underneath the tree I placed Joseph with Mary and baby Jesus and a few angels. Our Christmas tree was above all child friendly because of grandson Toby. So it wasn't a sophisticated, elegant Christmas tree, but a cheerful every day tree. After that I collapsed on the sofa and answered emails !

In our painting class a few were absent too, so many people are sick which is no wonder with this strange weather, and they also said that there is a virus wandering around. Which one was not precised  and those who had a flu shot got the flu even worse. Therefore I never have a flu vaccination. 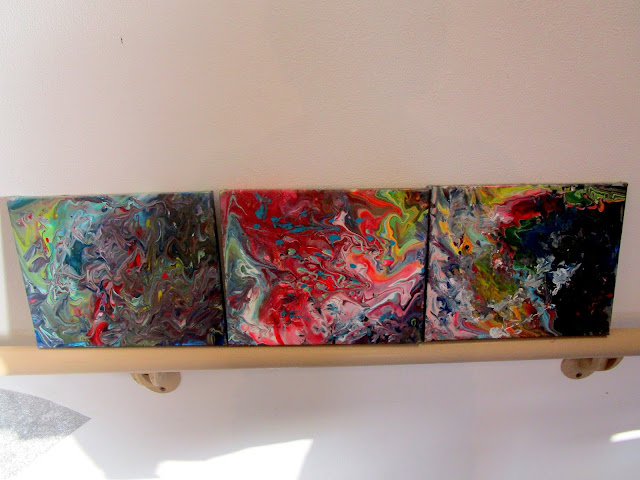 My three small paintings had dried during the week and it was amazing that with the three colors I had used and had mixed in one pot and poured over the three canvas  came out all different !

After painting we went for lunch this time a quick one, because I had to check if my TV furniture had arrived in the shop, because I have hired one to pick it up and put it together so that he won't come for nothing. 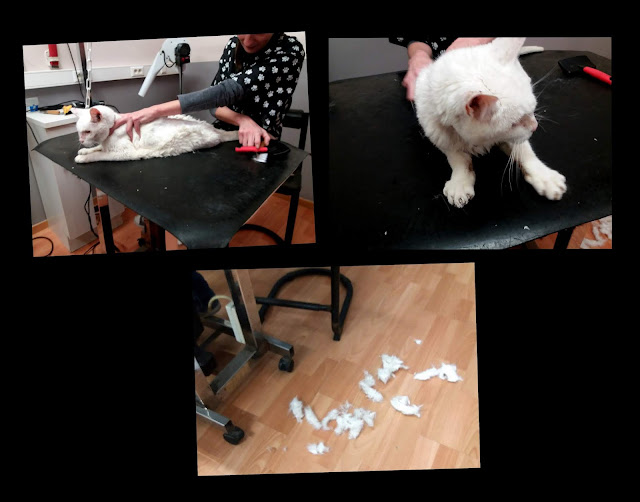 Grandpa Arthur instead of becoming bald with the age, got long hairs ! I didn't even know that a short hair cat can become a broom. The poor boy was full of knots and I had to take him to the groomer. In the beginning he was cooperative but then he started to growl and hiss he had enough. But all in all it went far better then  I had thought. Now he looks like a sheared sheep ! I wonder if he agrees to wear a coat. But that is not necessary as he doesn't go out anymore.

Oh, my darling Arthur! So handsome now he has his fur combed!

I love your paintings! They are beautiful! You know they would be quite lovely hung together.

I have been very ill, but I am on the mend.

I still haven't got my tree up. I'm wondering if I will bother. I'm sure Arthur feels better now he has been groomed.

The magic of mixing colors! It makes one wish to try it too and get oneself an 'original' painting.

Wow--that's a lot of light outside of your friend's apartment! Your tree looks nice. I've always loved everyday family trees rather than fancy themed ones. I've heard the flu is going around. I never have the vaccine, either. The paintings look so interesting!

Cats let you know when they've had enough.

Poor Arthur and his winter haircut. We can hire professionals to untangle Christmas lights. We almost had to hire one last year. The lights will go up tomorrow, so we shall see.

Dear darling Arthur. I never realised he was getting so old. He's outlived my Shadow who had the same character. Last year I lost my two oldest kitties.